It’s got to be some mysterious when talking about the British royal family, and people all love gossip such as what the Queen usually does, where the Duke of Edinburgh frequently goes and what do they eat, bla bla…There are so many people that care about this and now the media is so developed that people who like gossip about the British royal family can know about the mysterious First Family of Britain by exposure of the news reported to the world.

But today I’m not talking about hearsay, what I want to talk about today is a wholesome topic. I bet you know that the Queen is 87 years old by this year, basically she has always remained hale and hearty although she was hospitalized temporarily for some stomach problems that we heard from the news, and she also attends several activities unaffectedly. So it could be imagined entirely that the Queen is a person who is really good at caring herself. And if you want health as the same as the Queen belongs, your diet everyday is just important. Today I will uncover the secrets of a diversity of eating habits that the Queen has, maybe you can take a reference for your later well-being.

Darren McGrady, who worked as a chef at Buckingham Palace made it public that the Queen eats very simple at home except attending several major parties outside, and she tastes relatively light, for example, such stuff as spicy food or garlic or onions which are heavy would never appear on the Queen’s menu. And Special K (an oatmeal brand), jam sandwiches are this adorable lady’s favorite for breakfast. Sometimes she will eat some fruits from their own greenhouse. 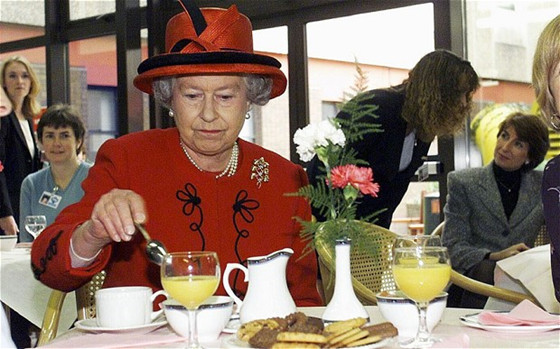 Her lunch is generally at 1 pm and always simple, such as grilled flatfish without sauce, which is a sort of meal very typical for the Queen, and traditional English afternoon tea is also essential for her, there is no big difference between hers and common people’s, including a small sandwich, scone and etc. On dessert (I must say that the Queen is indulged in dessert), she is very fond of chocolate especially a kind of chocolate dessert with its name called Chocolate Perfection Pie (this dessert is served on the wedding party of Prince William and Kate last year). But if she has her own meals, she will choose a plate of fruit. And the Queen tastes very light on sandwiches, usually the cucumber sandwich or egg mayonnaise commonly seen in supermarket (really and undoubtedly too healthy!!)

While the dinner might include venison or salmon, as well as the peaches planted in Windsor Castle conservatory. At night the Queen will drink a little gin and Dubonnet.

Actually I don’t know if you thought the same with me that the Queen’s lived such a healthy lifestyle really amazing and admirable. Such an eating habit can’t be formed within one or two days, it needs ten years or more.

And people who have a strong determination to lose weight might shrink back at the sight of her menu. But she is the supreme monarch of Great Britain, she represents the whole country no matter what she does, and it is vital to keep up her healthy profile by which it is no weird that she is able to win such a high popularity among the British people. Even for the common diet in life she is so exquisite just like the Chocolate Perfection Pie that she loves, a word to describe the past 60 years of her life would be “perfect”, and Darren McGrady said so.
How to make Jam sandwich that the Queen of Great Britain loves the best? Let’s follow the recipe.
Jam sandwich: 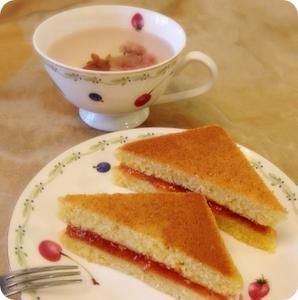 1.    Melt butter and whip slightly
2.    Add caster sugar and salt into butter
3.    Whip the mix until pale and expanded
4.    Stir in egg wash into the mix per 3 times, add egg wash next time after previous mixture is  well incorporated
5.    Mix low protein flour and baking powder and sift into the mix
6.    Scrape flour and butter until well incorporated
7.    Pour the cake paste into the mold and flat slightly
8.    Heat oven to 320F and bake for 20 minutes
9.    Prepare two cake slices and wipe jams in

Well that’s cool for you, isn’t it? Eat the same as the Queen of Great Britain, Undoubtedly you couldn’t be the Queen of Great Britain, but you can be as healthy as her! The secret of her eating habits inspires me a lot and I would like to share with you and wish you become inspiring just like me! So grab your baking utensils and prepare the ingredients to make the “royal” jam sandwich!