I believe the story of Krishnan touches many American people’s hearts. In November of 2010, Krishnan, who gave up high-paying job in Swiss to serve the poor in his hometown of India, awarded one of the ordinary “Ten heroes in 2010” who changed the world.

Krishnan now prepare to build a house for the poor, half buildings are finished with total 8 buildings. He determines to serve more poor men. On the award party held in Los Angeles, 29 year-old Krishnan spoke out his original intention facing CNN reporter: it’s not fearful if you were poor, but what is terrible is that you were indifferent when receiving other people’s help. The aim I want to do this is not only to supply food and shelter for those people who need help, but also to cook thanksgiving into a real delicacy.

From Krishnan I learned that you should always keep a thanksgiving heart, for your parents who brought you up, for friends who give help, for colleagues who walk shoulder to shoulder with you, even for strangers who smiled at you, for pets who accompany you all the time, and for foods that keep you survive…

Method:
1. Blend medium protein flour, sugar and salt in a container and freeze for 20 minutes
2. Cut butter into 2.5cm cubes, stir in step of 1, rub the mixture with your hands
3. Pour in lime juice and 1/2 ice water, rough mix and squeeze with your hands until a bulk shaped
4. Place it on the chopping board, sprinkle some flour on the dough, press the dough into a round slice
5. Put the slice into a 9 inch pie pan, trim the edge and leave an extra edge of 2.5cm, roll it down to form a thick and decorated edge with your fingers
6. Store in refrigerator for at least an hour
7. Poke some holes on the bottom of the pie crust, spread oil on the bottom of silver paper and lay on the crust, place heavy beans, rice or stones on the silver paper, preheat oven to 399F and bake for 25 minutes. Remove the heavy beans, rice or stones and return to the oven and bake for another 10 minutes until golden and brown
8. Boil the milk, mix egg yolks, brown sugar, corn starch, cinnamon powder, nutmeg powder and salt, stir in hot milk while keep mixing
9. Bring the liquid of step 8 to a boil again and keep stirring until dense, remove the fire
10. Add vanilla extract and mix well, add butter per several times and mix, which is the final pastry cream. Cover it with a plastic wrap and store in refrigerator
11. Whip heavy cream, powdered sugar and vanilla extract until soft peaks form, scrape in sour cream
12. Top the pie crust with a layer of banana slices and half the pastry cream, lay another layer of banana slices on the cream, and place the remaining pastry cream on the banana slices
13. Spread with mixture of step 11 and banana for dressing 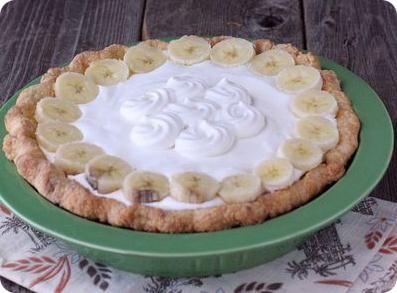 Method:
1. Prepare the crust (take reference of the first American banana heavy cream pie to make the crust)
2. Roll the crust into 0.4 cm thickness, poke holes on the crust and lay it on the pie pan, loosen for 10 minutes
3. Preheat oven to 392F and bake for 15-20 minutes, let cool
4. Soak the gelatin with ice water
5. Mix 50g caster sugar in milk and bring to a boil until melted, add vanilla extract and remove the fire
6. Prepare another pot, beat whole eggs, egg yolks and the remaining 50g caster sugar well
7. Add in sifted wheat flour and corn starch and blend
8. Stir in pinch vanilla extract and milk in the pot
9. Stir in the remaining and back into the fire and boil with slow fire until dense
10. Drain the soaked gelatin and add in pot, stir until dissolved
11. Add in unsalted butter and wait until the filling is cooling
12. Spoon the filling in the crust by eight points
13. Slice bananas and top them on the filling, store in refrigerator for at least 4 hours until condensed 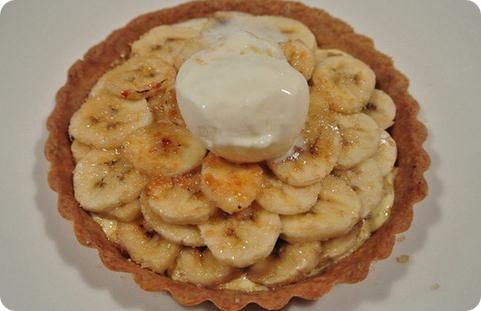