Waffles are great fun to cook and eat, but cooking them does have a slight downside…cleaning up afterwards. Most modern waffle makers have non-stick plates which makes it easier, but even then, they often need a good scrub and a rinse. Wouldn’t it be easier just to put in the dishwasher? Of course it would, and the solution is looking for the best waffle maker with removable plates. In this review, we are going to put three of these to the test and see which is the best.

The Krups waffle maker with removable plates is more than just easy to clean after you’ve made waffles. It has many great features which make cooking your waffles easy and cooks them just the way you like them.

Unfortunately, a lot of waffle makers just cook a ‘one size fits all’ waffle so each one they cook is exactly the same. Thankfully this is not the case with this Krups waffle maker. It has a browning control which allows you to cook your waffle the color you like best. So, if you like a dark, and well-cooked waffle go for setting #5, or alternatively if you prefer a light, golden waffle, setting #1 is the one to go for.

Prior to cooking your waffle, you need to allow the waffle maker to reach the appropriate cooking temperature, and it lets you know it has done so with an indicator light. Likewise, once your waffles have cooked to the browning setting you have chosen, another indicator light comes on. In addition to the light, this waffle maker also beeps when ready, which is handy if you are attending to something else at the time and don’t see the light coming on.

The cooking plates are square shaped, and it will make four square-shaped waffles, each with the familiar crisscross pattern. The overall size of the waffle maker plates is around 12 inches across so each waffle should be around 4 inches square.

One of the biggest appeals of this waffle maker is its removable cooking plates. These plates are made from die-cast material and as you’d expect, have a non-stick coating. This helps make it easier when it comes to serving your waffles, but it also makes cleaning easier too. The great thing about the plates, is they can be removed and placed in the dishwasher so that even if some batter does get ground in, it will be cleaned off.

The overall size of the Krups waffle maker is 16.5 inches by 12 .6 inches and it is 6.7 inches deep, so it is small enough to be stored in most kitchen cupboards. Krups have usefully created a cord wrap in the base so that the electrical cord can be kept tidy and out of the way when not required. There is even a handle lock so that when you store the waffle maker there is no chance of it opening, plus it means it can be stored vertically too. 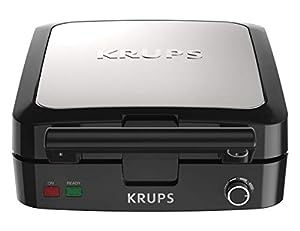 The waffle maker with removable plates from Cuisinart, not only has all the features you’d want to make delicious waffles, it also looks great too, so it will appeal to those you like their small appliances to add a touch of class to their kitchen.

There is no getting away from the fact that is a very eye-catching waffle maker. It is finished with brushed stainless steel, which not only protects it, but also gives it a classy, and modern look. The lid’s handle design is also appealing, and with a black trim running around the middle of the appliance, you could be forgiven for thinking it is a small jewelry case, rather than a waffle maker. Now looking great is all good and well, but you ‘ll also want to know if it is any good at cooking waffles, so let’s do that right now.

When you switch this Cuisinart waffle maker on, it will obviously need to heat up to the appropriate temperature to cook. Rather than you having to guess when this is so, it has an indicator light to tell you, and in case you miss it, there is also a beep that accompanies it. When it’s ready, simply pour in your batter, close the lid, and your waffles will be cooking.

The plates are configured as most waffle makers, with four waffle squares within a larger square, so you will be able to make four waffles at a time, with each being about 3 inches on each side.

On the front of the waffle maker is a dial which can be set to any one of 6 positions. This controls the temperature so that you can make your waffles as crispy as you like or as soft as you like, and in doing so also brown them dark or light depending on your preferences. Thanks to the non-stick coating on the plates, serving up should be simple, without any need for scraping your waffles off with knives or forks.

Once all your waffles have been cooked, and it’s time to clean up, the cooking plates are easily removed. As they are dishwasher safe, there is no need for you to clean them…let the dishwasher do it for you.

If you like getting added extras whenever you buy something, then you’ll love the fact that this waffle maker with removable plates comes with a pair of cooking tongs and a recipe book included. 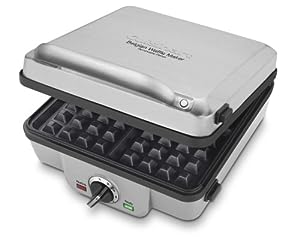 With this product, you are getting two grills for the price of one. Not only can you use it to make hot, delicious waffles, but it can grill your favorite toasted sandwiches too.

We love products that make cooking as easy as possible and this T-Fal non-stick grill does just that. Whether it’s breakfast time and you are having some waffles and jam, lunchtime and you’d like a toasted cheese sandwich, or perhaps you fancy some dessert after your main meal, and waffles topped with ice cream is on the menu, this grill does it all.

For a sandwich, it is a simple case of buttering two slices of bread, placing them on the sandwich plates, and then deciding which fillings you’d like to use. Whether it’s something simple such as ham or chicken, or you want to try something a bit more adventurous like jalapenos and cheese, you simply place your filling on the bread, close the grill, and leave it to cook.

Now this review is specifically about waffle makers with removable plates, and the obvious advantage of that with this grill is that you can swap between the sandwich plates and the waffles plates. With the waffle plates in place, you can pour in your waffle batter, close the lid, and before you know it you’ll have two hot and tasty waffles.

To help you cook either toasted sandwiches or waffles there are red and green indicator lights which let you know when the grill is switched on, and when it is up to temperature to start cooking. Not only is this helpful, but a safety feature too, so that anyone who comes near the grill can see it is on, rather than touching it accidentally and getting their hand burned.

Once you have eaten any meal there is always the chore of washing up although if you have a dishwasher, it is just a case of stacking it. With grill plates being coated with a non-stick material they are very easy to clean, but with them also being dishwasher friendly they can be stacked along with your other dishes and washed at the same time.

For convenience, the power lead can be wrapped into the base of the grill, and when you want to store the grill until next time the lid can be clamped shut and the grill placed in any cupboard vertically to save space.

Three great products and all of them make terrific waffles, but only one of them can win our best waffle grill with removable plates award, and after much thought, the winner is the Krups Belgian Waffle Maker.

It allows users to make waffles to their preferred color and crispiness thanks to its browning controller. It also has indicator lights and beeps when it is ready to cook, or when the waffles are ready.

Storage is not an issue thanks to the lockable handle and the fact it can be stored upright. We also have the removable plates which save so much time and effort in getting them clean.

Finally, it is great value for money and almost half the price of some other waffle makers with removable plates that don’t have as many features.