Learning what these foods are, and the recipes to prepare them, can take time and a fair bit of research, but you can forget all that thanks to an amazing book called “Will It Waffle?” by Daniel Shumski.

“Will It Waffle?” Overview

Let’s first look at an overview of the book and what you can expect to find inside it. Following the introduction, there is an initial chapter which explains some of the techniques used, highlights what tools can be used, looks at some different types of waffle irons, and has some notes about some of the recipes which are about to follow.

The subtitle of the book is “53 Irresistible and Unexpected Recipes to Make in a Waffle Iron”, so it is no surprise that the bulk of the book is then taken up by the author explaining each of them in some detail.

One of the best aspects of the recipes is that they are spread throughout the day. You have a chapter with breakfast and brunch recipes, next it is main courses, then a chapter on snacks and sides, next comes desserts, and finally, we have a couple of waffle recipes.

The appendix is a very interesting look at how you can develop your own waffle recipes which is a great way to encourage readers to be creative in the kitchen. The last section of the book is a useful set of conversion tables.

There are many who will tell you that breakfast is the most important meal of the day, so in light of that, it is no surprise that breakfast and brunch is the first chapter of recipes. There are seven recipes in this chapter which include some of the most popular breakfast ingredients such as bacon, eggs, sausage, cheese, and hash browns.

These ingredients are combined with accompaniments like maple butter, whipped butter, rosemary, and even chocolate which I can assure you, are mouthwatering just typing them out, let alone eating them.

As you might expect, Main Courses is the largest group of recipes simply because there are so many different food types that are used for these. It would probably be easier to list the ingredients which Daniel Shumski has left out of this section than those he has included given the huge variety of options you have here.

There are some classic favorites given the waffle iron treatment such as such as a waffled bacon, lettuce and tomato, or WBLT as it is now known, and then we have spaghetti and waffled meatballs, a waffleburger and cheese, and finally tuna salad.

Beyond these classic dishes, there are some which may not be as well known, and combine a vast array of different ingredients. If you like seafood there are recipes which include crab, salmon or calamari. For pasta lovers, there’s waffled macaroni and cheese, and chicken is included in a wonderful dish with spinach, pine nuts, and feta.

Cheese lovers aren’t forgotten with at least five recipes. The list of veggies includes mushrooms, herbs, and asparagus with even the good old potato appears in a couple of recipes too.

If you aren’t hungry enough for a main course and want to prepare a light snack, or if you want to include a side with your meal, the book has over a dozen recipes which you can use your waffle iron to make.

One thing you will have noticed by now and will see in more detail when you read the book, is the recipes included have an international element to them in every section.

There are recipes from the far east like sweet and sour, Mexican dishes such as waffled migas, a Cuban sandwich, and plenty of Italian dishes such as zucchini and spaghetti. Of course, there are other countries and areas of the world included in the recipe list too.

No meal is complete without a dessert and “Will It Waffle?” has a list of seven which are guaranteed to end the meal successfully. There are some unique combinations such as pineapple and cinnamon, mochi and green tea ice cream, as well as simpler recipes for desserts like apple pie.

It should come as no surprise that in this book of recipes for a waffle machine, there are at least two which are specifically for waffles.

The first is a simple recipe for Yeast-risen Waffles and the second is one for a delicious Buttermilk and Cornmeal Waffle. Nothing too exotic but none the less very tasty.

The final part of the book is an appendix with some very useful and interesting tips and information. It explains some of the pitfalls of including too much or too little liquid when cooking with your waffle iron, and similar advice about using butter.

Other useful information relates to some of the terminology relating to cooking with a waffle iron plus advice on some of the foods that your waffle iron is not suited to cooking. It also encourages readers to experiment, which no doubt the author has done himself, in order to come up with the incredible 53 recipes in this book.

After reading this book, your eyes and indeed your mind should be opened up to the diversity of foods that could be cooked with your waffle iron.

Daniel Shumski has included recipes for every meal of the day and used the maximum number of different ingredients such as seafood, vegetables, meat, and pasta, to name but four.

Inside the book, you will find each ingredient clearly quantified, and the methods and techniques for each recipe explained in detail so that even cooking novices will be able to understand. 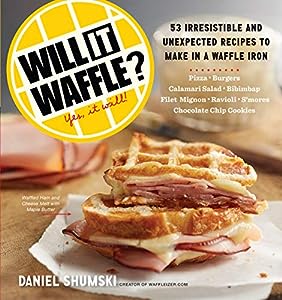 Will It Waffle?: 53 Irresistible and Unexpected Recipes to Make in a Waffle Iron 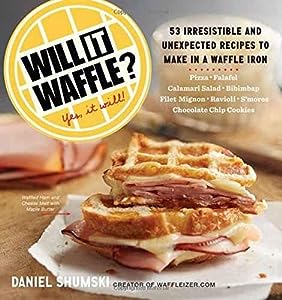 Will It Waffle?: 53 Irresistible and Unexpected Recipes to Make in a Waffle Iron - Paperback by Daniel Shumski