The recipe uses yogurt which is a kind of food that can shape your body and beautify your face, I have to say that it’s really a healthy dessert and dessert can be healthy.

Yogurt mousse is the best “good-tempered” dessert that I’ve ever known, the milk flavor itself is so tasty, while it can mix with different and juicy vegetables like blueberries, raspberries, strawberries, mango…it’s ever-changing on appearance, color and taste, healthy, delicious and low fat yogurt mousse is a kind of dessert that can keep you slim and beautify your features.

The leading role of today’s macarons yogurt mousse is yogurt, and the special thing is this time I use a different method to process egg yolk, which makes the egg yolk paste more thick and dense after whipping, further to well support the mousse paste, cut the usage of gelatin and ultimately make the taste more soft and light. And which is more, the syrup that is warmed up to 240.8F-249.8F has the function of sterilization to egg yolk, which promises a better hygiene and safer dessert to us. 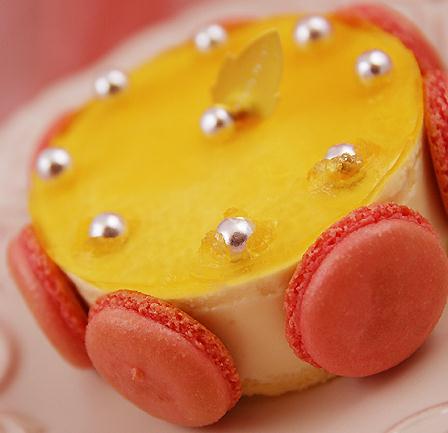 1.Wrap the bottom of the mousse mould with a plastic wrap, cut cake slices into two pieces with 1cm diameter’s difference
2.Soak the gelatin 15 minutes ahead of time. Mix milk and yogurt
3.Sugar and water<the ratio of sugar and water shall be 10:3> into a thick milk pan, boil under 240.8F-249.8F with gentle fire
4.Pour the syrup into the egg yolk pot, and keep whipping fast, until they are stiff. Be sure not to be burned by the hot pot. Mat a wet towel under the pot, avoid of moving. Whip until the pot is cool and the egg yolk paste is thick, it takes for about 5 minutes
5.Mix the milk and yogurt mixuture with syrup egg yolk paste, squeeze half lemon’s juice
6.Whip the light cream until 60% down, mix the light cream with the milk egg yolk paste
7.Soak and dry the gelatin 15 minutes ahead of time, set over simmering water, melt the gelatin into liquid, return to room temperature. Take out 1/3 cream paste and mix it with gelatin, and then mix the rest cream paste too
8.Put the plastic wrap side on the counter, lay the raspberries, pour a half of the mousse paste, put in the smaller cake slice, press until mousse and cake slice are equally in height. Freeze for 10 minutes until it’s half frozen. Take it out and cover it with raspberries, pour the rest mousse paste until 1cm distance left from the mould edge, and put the bigger cake slice onto it. Freeze for at least 1 hour until it’s frozen. Take out the well-shaped mousse, gently rip off the plastic wrap, warm up the mousse by blowing with a hair drier for 1 minutes, and easy demould

For the decoration: brew the jelly powder with hot water, after cooling, pour it onto the surface of the cake, keep it for cold storage for half an hour, until it’s frozen and then demould. Decorate macarons around the cake.