When people think of desserts, they immediately think of fatty and calorific foods packed full of sugar, cream, oil, butter and other tasty but extremely unhealthy ingredients. As far as delicious and indulgent dessert recipes go, you’d be hard pressed to come up with something better than a moist sticky toffee pudding. You’re probably thinking that anything with the words toffee, pudding, and sticky in the name is generally not going to be unhealthy but in reality with the right ingredients the recipe can not only be low in fat and calories, it can also be healthy and taste amazing in the process. This recipe for sin-free sticky toffee pudding is quick, easy, and is loaded up with nutrients and taste and flavour too.

The following recipe makes enough for four puddings, with each pudding containing just 4 grams of fat and around 320 calories, making them a delicious snack or dessert that will satisfy your sweet tooth, without running your diet or making you feel guilty in the process. 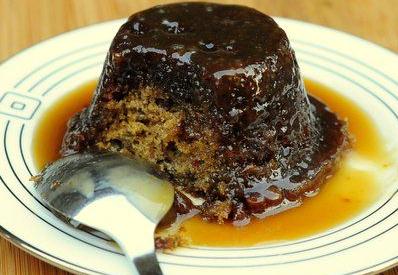 2. Take your pitted dates and place them into a pan with the 175 ml of water and simmer them for around five minutes.

3. When soft, take the date and water mixture and blitz in a food processor, adding the vanilla extract and 4 tablespoons of the maple syrup and blitz again until smooth.

4. Pour this date mixture into a bowl and fold in the 2 egg yolks, and the sifted flour.

5. In a separate bowl, mix the egg whites until stiff peaks begin to form and then carefully fold into your date mixture.

6. Take four pudding moulds and add a tablespoon of maple syrup to the base of each one, before pouring the mixture on top.

7. Cover each mould tightly with kitchen foil, stand them in a deep ovenproof baking dish and pour boiling water from the kettle half way up the side of each mould.

9. Uncover the puddings, allow to cool slightly, and then turn each one out onto a plate or into a bowl.

10. To finish the puddings, add a spoonful of the Greek yoghurt, an optional drizzle of maple syrup, and enjoy.