Some scientists and doctors called pears the All-around Healthy Fruit, the air is polluted more seriously than the past, eat more pears can improve your health and protect your body functions.

A study of American biology scientist in 2009 shows that unmatured and semi-matured pears have the function of radiation protection. It’s because that pears need a bunch of sunlight during the growing up, they can absorb effectively of the rays in sunshine. And pears can moisten your lungs, and the data shows that the ratio of getting cough by people who eating more pears is more lower people eating less pears.

I used hometown pears called white pears that brought to me by my mother to make this cake. 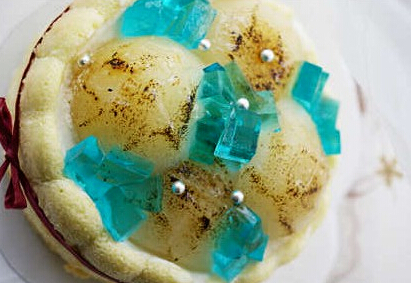 For the lady fingers:<To make the bottom and surrounding of the cake>

1.Whip egg whites into stiff, add egg yolks and whisk until the mixture turns into milk color, sift the flour in, mix
2.Sprinkle sugar powder on the moulded mixture, after 15 minutes’ standing, sprinkle sugar powder for the second times, bake in the oven under 392F for 10 minutes

For the pear mousse:

For the decoration: blue curacao sillabub

Sugar + water+ blue curacao, and white bean jelly<water: bean jelly =10:1>, match them according to the flavor and color