Every Thanksgiving Day you will see the whole nation of US burst with cheers, people go to churches for praying, costume parade, theater performances and sports competitions are held everywhere in urban and rural municipalities, and schools and shops are required to have a holiday break. Kids wear bizarre costumes and masks to mimic the Indians, singing and trumpeting on the streets. People all come home for the holiday, sitting around together at the table and munching the delicious turkey.

On their table, housewives place fruits and vegetables instead of flowers. And there is often a big pumpkin placed in the middle, piling around some apples, corn and dried fruit. Sometimes they also hollow the apples and pumpkin and fill in with shelled nuts or lit candles. On Thanksgiving Day, hostesses will not invite guests to go to the living room, they would rather stay longer at the dinner table until the last candle burn out.

Personally I appreciate the word “Thanksgiving”, because it allows people to re-examine their lives from another perspective, for our own suffering, misery, sadness and happiness, we are inclined to see it as a partiality from heaven, a deep love from the unknown in awe. I believe that all the misfortune is just for a better future, and should therefore be grateful of God’s gift to myself.

Oh, can’t agree more that apple is a healthy fruit that can absorb excess moisture in the intestines and produce moderate stimulation towards it due to it has pectin components. And apple contains calcium which helps other organs absorb calcium in other foods. Rich in vitamins, apple is the number one fruit which has the most vitamin C that makes apple become the best fruit to promote digestion and growth. And vitamin C also keeps bones and teeth healthy.

In America, apple stands for soundness and affluence, and apple pie means the flavor of home, every Mom in the United States shall make apple pie and every American believes that his/her mother makes the best yummy apple pie in the world.

I’m gonna gather 5 apple pies here for you to choose which one would be present on your Thanksgiving table. And last year the first family of the United States choose apple pie as their Thanksgiving food. Can’t be too much honored! And I’m gonna introduce you more food on Obama family’s table to enrich your dinner table next time.

Method:
1. Cut butter into 1.5cm cubes and mix with sifted low protein flour & high protein flour
2. Using a scraper to scrape from all sides to the middle, pour cold water in the mix
3. Mix still with a scraper, do not crush the butter
4. Flatten the mix on a chopping board, cut evenly into two halves and fold them up with the scraper
5. Repeat step 4 for 5 times until not broken by lifting the dough with your single hand for 3 seconds
6. Wrap the dough with a plastic wrap tightly and put in refrigerator for 30 minutes
7. Peel off the apples and cut into 4 equal parts, remove the stones and cut into 8mm thick slices
8. In a pot add butter, cook with mass fire until brown and bubbles disappear, then add apples and caster sugar
9. Cook with mass fire, coat the apples with sugar, pour rum after apples turn into dark brown color, and sprinkle cinnamon powder
10. Let cool with dotted bread crumbs in a container
11. Sprinkle flour on chopping board, remove the dough from the fridge, roll the dough flat into a 20cm wide, 40cm long one
12. Fold the tow ends of the long edge into the middle to form a double layer, then fold in half to form a 4 layer, spin the dough to 90 degrees, and repeat once of the motion
13. Roll at last a 3mm thick large slice, set in a container and cover it with plastic wrap and refrigerator for 10 minutes
14. Set aside a while after removing the dough from the fridge, and lay in a 8 inch mould spread with butter, press the edge of the mould with your finger to cut the extra dough, preheat oven to 428F
15. Place apple filing on the crust pastry, beat egg and brush a layer of egg wash on the edge of the pie
16. Cut extra dough into long stripes and cross on the filling, stick the edge to the edge of bottom crust pastry and cut extra parts
17. Circle the edge of the crust pastry with long strips to fasten the pie in avoid of overflowing of the filling
18. Brush egg wash on the surface of the pie, bake to 428F for 15 minutes, then reduce the heat to 356F for 25 minutes
19. Melt apricot jam over water and spread on the pie after baking

Method:
1. Soften butter, stir in caster sugar until well incorporated, then add an egg and mix
2. Sift in low protein flour, put almond powder directly in the mix (needs no sifting), blend
3. Refrigerator for almost an hour
4. In a bowl mix softened butter, milk and egg
5. Add almond powder and sifted low protein flour to form a liquid
6. Peel off the apples, remove the stones, cut into bulks, and set aside in water (if you like soft taste, cut apples into thin slices)
7. Make a few cuts of the apple, it will help cook sooner and better
8. Roll the dough into a round and thick one after removing from the fridge
9. Lay the dough into the mould, cut extra dough edge
10. Cover the apple bulks evenly on the dough
11. Pour the filling liquid in the mould, preheat oven to 356F and bake for 25-30 minutes until golden and brown
12. Spread a layer of powdered sugar to taste 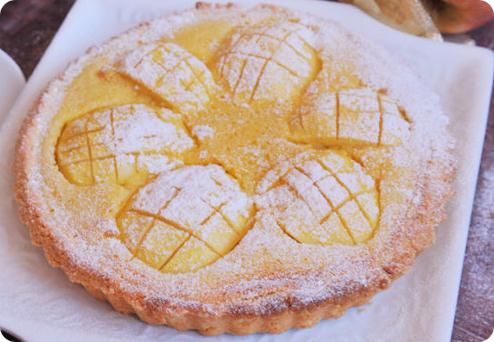 Method:
1. Soften 100g butter under room temperature, pour in sifted 225g flour
2. Rub it into little particles with your hands like rough corn flour
3. Beat in an egg and add 10g water, scrape into a dough
4. Roll it into a large slice covered with plastic wrap and refrigerator for at least an hour
5. Remove from the fridge and roll into a large slice 8cm bigger than mould and below 0.5cm thickness
6. Brush oil on the mould and sprinkle with bread crumbs
7. Lay the dough in the mould, press the dough with your hands to stick close to the mould
8. Cut extra slices and poke holes over the dough
9. Cover the dough with a silver paper and place green beans on the paper, heat oven to 392F and bake for 10 minutes until took shape and let cool
10. Peel off the 3 apples, cut each apple into 10-12 bulks like a moon shape, remove the stones
11. Add 150g caster sugar in a little water and boil into a syrup
12. Stir in 25g butter and boil with medium fire until bubbling
13. Pour in moon-like apple bulks and stir-fry until syrup dense and apples soft
14. Drain apples and let cool the syrup
15. Mix 5g starch and 5g cake flour, sift. Add in yogurt and mix until smooth
16. Stir in 30g caster sugar in 2 egg yolks until melted
17. Pour the egg yolk wash into yogurt paste and mix well, add shredded coconut
18. Add pinch syrup and mix until well incorporated
19. Cover the cooled crust pastry orderly with caramel apples and pour in the liquid of step 18, heat oven to 392F and bake for 30 minutes until slightly golden on the edge of apples 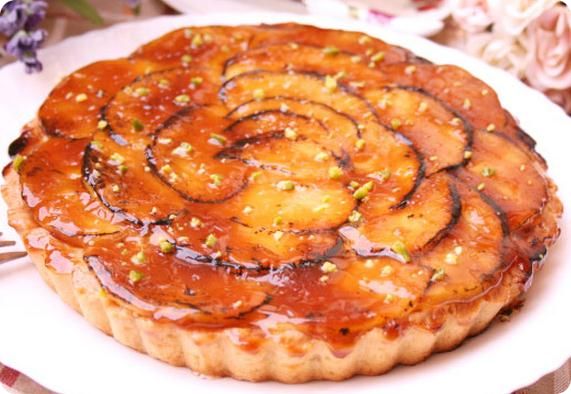 As for the crust pastry, you can choose one of the methods above to make two.

Method:
1. Preheat oven to 446F and set the rack in the bottom layer
2. Cut apples into 1cm thick slices and put in a container
3. In another container, mix flour, sugar and cassia powder and pour on the apple slices to make apples coated with flour
4. Roll the dough large separately, one for the bottom, pour the filling and sprinkle maple syrup on the bottom crust pastry, and cover it with another crust pastry, trim and seal
5. Poke several holes on the surface and spread with sugar particles
6. Into the oven and bake for 10 minutes, and reduce heat to 356F and bake another 60-70 minutes until golden and brown

Method:
1. Set aside one crust pastry under room temperature for several minutes until softened
2. Cut the crust pastry into rectangular, fold the two ends of the long side in the middle with 1.5cm
3. Rinse and peel off the apple, remove the stones, cut into even thin slices, brush them with fresh cream (no whipping the fresh cream)
4. Sprinkle caster sugar, and cut cream into little cubes and top them on the apple slices
5. Preheat oven to 374F, bake for 40 minutes and let cool 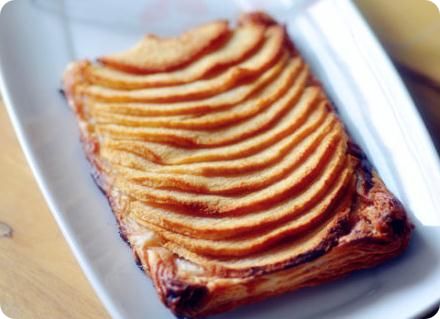