Honey cake would be the thing that accompanies with me since I have got memories. I used to eat honey cake as breakfast. And even now, there are honey cakes that appear in the super market, but with a better taste. They are truly delicious, but if you would make them yourself, I think the taste would be much greater! 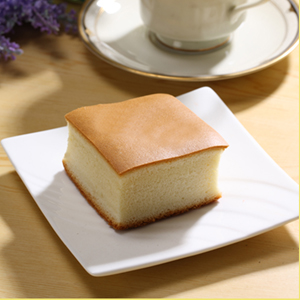 1.In a bowl add caster sugar and honey
2.Beat eggs into the bowl
3.Pour hot water in a pan, place the egg bowl in the hot water, and whip the eggs with an electric mixer
4.Whip at first with a low speed, until bubble shapes, turn into high speed and keep whipping. Eggs would become more and more dense
5.Sift low protein flour in the whipped egg paste
6.Scrape with a knife, and mix the flour with the egg paste. Do not stir with a circle shape, in avoid of missing bubbles. <better sift flour for 2 times, mix well then sift the second time>
7.Pour 30ml salad oil in the paste, mix well
8.Pour the paste into the mould with a thickness of 1/2 or 2/3
9.Heat oven to 374F, bake for 15 minutes until golden and brown

1.Eggs would be easier to whip under 104F, so it is useful to whip eggs by placing egg bowl in hot water, in which way the egg wash temperature increases in a moderate one. But it could affect the whipping of eggs and the stability of the bubbles if the temperature is too high
2.Whip whole egg is more difficult than whipping egg whites. I suggest to use an electric mixer, a manual egg beater is hard to whip well
3.Make sure to use tasteless vegetable oil, soybean oil, corn oil would be okay, remember do not use tea oil, peanut oil or olive oil that has a taste, or the flavor of the cake would be so weird
4.Make sure to whip eggs wholly, and watch out your gesture when mixing eggs with flour. Cake would be affected on the mellow or even it could not be expanded if you do not whip or mix well