The recipe comes from famous french dessert master Christophe Felder, who has taken charge of the dessert chef of Hotel de Crillon where they hold adult balls every year for rich girls in Paris, and he is also the main developer of Henri Charpentier of Japan with long histories.

Although he is a senior chef and dessert developer, he is plain in his books, in which more actual contents and basic knowledges are centralized than decoration parts or baking skills. 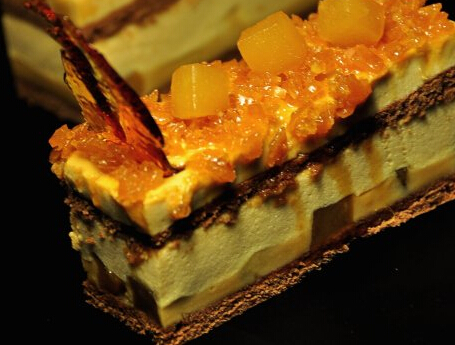 For the chocolate cake slice:

1.Cut dark chocolate into cubes
2.Melt dark chocolate over hot water at 113F, do NOT surpass 122F, and boil the light cream with gentle fire with temperature close to 194F
3.Whip egg whites to a rough foam and add a half sugar
4.Keep whipping egg whites, add the rest sugar, until the egg whites is stiff
5.Add boiled light cream per 7-8 times into melted dark chocolate, mix every time before adding the next
6.Add 1/3 whipped egg whites into step of 5, scrape gently
7.Sift 1/3 flour into step of 6, scrape gently
8.Add rest egg whites and flour alternately, each time for 1/3, mix well into a chocolate paste. Heat oven to 302F, cover the ovenware with a silver paper, flat the paste onto it, with volume larger than two mousse mould together. Bake for 22-25 minutes. Rotate the cake slice after taking out from the oven, and press it gently with a rolling pin, fast wipe off the silver paper, press it into two square slice with mould, stuff one in the bottom of the mould, the other one on it

For the caramelized pear cubes:

1.Cut pears into cubes
2.Add sugar in a dried pan, boil with slow fire until the sugar turns into rich caramel liquid
3.Filter water of pears and add into step 2, cut vanilla bean into half, scrape out the kummins, put them into the pan and gently stir with a wooden spoon
4.Smear the sugar water of canned pears onto the cake slice, and lay the caramelized pears onto it, remember to keep 20 cubes for decoration

For the caramel custard layer:

1.Heat the light cream with oven to warm, soak the gelatin, add sugar in dried pan, boil with slow fire until the sugar turns into caramel liquid
2.Remove the fire, add warm light cream per 3-4 times, open the fire and stir while boiling
3.Add well-cut butter into mixture of step 2, keep boiling with slow fire, stir, until the caramel cream source is dense and bright, remove the fire
4.Add water dried gelatin into the mixture of step 3, mix
5.Pour the mixture of step 4 evenly onto the pear cubes, let cool

For the caramel mousse:

1.soak the gelatin, whip the light cream until 60%-70% is still flowing, refrigerate
2.Beat egg yolks and add sugar, boil milk with slow fire, use another pan to boil 90g sugar with gentle fire
3.Remove the fire after milk is boiling, pour slowly into the egg wash of step 2, keep stirring, sift and back in pan, heat to 179.6F
4.Remove the fire after sugar is boiled into a caramel color. Add 35g water, back to the fire and stir until the liquid is even, gently pour the caramel liquid into the egg milk wash of step 3, stir, sift and add gelatin at last
5.Wait until the temperature of mixture is reduced to 95F, then add light cream per 5 times, mix well each time.
6.Pour the caramel mousse into the mould, shake the mould gently, cover the second cake slice on it, and smear the sugar water of canned pears, add the rest mousse to fill the mould, freeze for 1 hour
7.Demould.

For the salty caramel particles: