I think it is a permanent topic to maintain unique tradition and characters in river of time towards any extensive and profound food culture. Although French food has always been the leading role in western food field on quantity, categories and cooking skills, and French people are thought to be the nation who understands eating spirit best. However, the traditional food culture in France has been affected by the massive industrial production and fast modern living pace, more and more French families below average begin to eat instant foods and American snacks that have no good taste. According to the official figures,French people are the most slim nation with a fat or over-weight population lower than America and Canada, even lower than England and Germany. But over recent twenty years, the over-weight people of France has increased nearly one third due to the inburst of American snacks. So that in these years, the French government has issued many policies to encourage people to regain the traditional habit of eating in daily life, use fresh vegetables and fruits as cooking ingredients, and reduce the intake of snacks, beverages and red meat.

Paris as the number one tourist city in the world, the largest victims of inferior industrial foods would be the tourists. Reports of French TV station shows that 90 percent of the fair price foods selling from the bars and restaurants where centralizes the largest tourists. So I suggest that if you are planning to travel in Paris, be alert to the restaurants and bars in resorts or you will spend a lot
of money to enjoy the instant foods that have no relation with original French food.

Generally there will be one or two good bakeries in every living quaters in France, from French stick, croissant,fruit tart to various mousse cakes, they are all hand made by professional dessert chefs or bakers with a taste just right. And that’s why French people have seldom made croissants or french sticks at home, because they are easier to buy than make. Although the French food culture has been affected to slide down, but the popularity of fresh fruit tart has never been affected. Each time I was invited to have dinner at my French friends, 90 percent of the dessert served was a fruit tart. Apple tart , pear tart in autumn, strawberry tart, peach tart in summer, and lemon tart and orange tart in winter…And fruit tarts in hand made bakeries are always the best selling desserts. I think the popularity of fruit tart would be the plain price and the popular flavor. Who can resist the crisp strawberry tart with custard or simple but delicious almond pear tart? 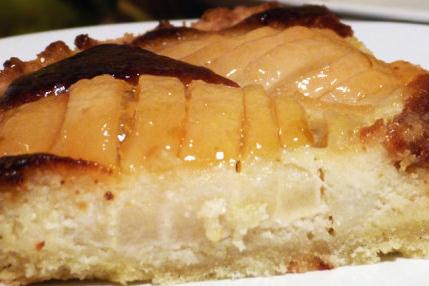 For the tart:<Take reference of previous posts>

For the almond jam:

1.Cut butter into cubes, soften with a wooden spoon, add caster sugar, whisk until well incorporated. Add eggs one by one, every time make sure to beat well
2.Add almond powder and flour, keep stirring. Add lemon peels and rum, put it into the fridge
3.Take out a 24cm round tart mould, cover a layer of butter avoid of sticky. Take out the well made tart, roll it into a 24cm round shape, fill in the tart mould, refrigerate for over 1 hour
4.Heat oven to 410F, take out the almond jam from the fridge, smear the jam onto the tart evenly. Peel off the pears, cut into halves, spread lemon juice in avoid of lemon fleshes turn into black. Cut pears into slices evenly, lay them on the almond jam. Bake 35-40 minutes under 410F until the almond jam turns into golden and brown
5.Warm apricot jam and 3tbsps water into a pot, filter the peels after boiling, brush the juice onto the pear tart