Waffles and pancakes to many people are staple breakfast favorites. Choose either of them and partner it with fresh butter and tasty syrup and your family will make it their daily routine to ask for it. They are the same to most of us but believe me, they carry differences between them. Their primary ingredients are flour, eggs, milk, and baking powder. Instead of yeast, we normally use eggs because there are much lighter and end up making these breakfast delicacies into a kind of quick bread.

A typical waffle is a relative to the pancake. Most of us will not notice the difference unless we are used to eating them on a regular basis.

They have a relationship based on the ingredients, but they have several differences that are not easy for people to differentiate  just looking at them. The differences are mainly in terms of ingredients and the cooking technique. Perhaps we can start with setting them aside from each other. We can start with a definition of each.

What is a Pancake?

A pancake is a cake of batter that is fried on each side either in a frying pan or a griddle. Pancakes are mostly thin flat but some can also be cylindrical in shape like the Fluffy Japanese pancake.

What is a Waffle?

A waffle, on the other hand, is a batter cake that has a pattern of deep indentations on either side. The indentation patterns are formed by a grid-like design exhibited by the two hinged parts of a metal appliance referred to as a waffle iron or a waffle maker. The batter is baked in that waffle iron.

These two breakfast favorites are basically quick breads. The two contain no yeast because the eggs take its place. When it comes to ingredients as indicated here, they share the same type. For topping, they are both topped with butter, syrup, or fruits sometimes. They are also available either from scratch or boxed.

What are the Main Identifying Differences Between Waffles and Pancakes?

If we go down and deeper on each other, you will have a better understanding of the differences. With that as the way, we can start with the ingredients.

Traditionally, waffles will have more fat than pancakes. There is also a slight difference between waffle mix and pancake mix. For instance, waffles will take more eggs making them lighter. On the eggs, some recipes will require you to separate the egg white and yolks and beating the whites until they become stiff. You will then fold them into the batter making a light and fluffy batter. For pancakes, the batter produces a more cake-like product that is denser. Please note that even if you use waffle batter for pancakes and pancake batter to make waffles, the end will be a different product.

When it comes to cooking, waffles will go into the waffle iron as mentioned earlier. The waffle iron, whether old-fashioned or the modern one, is heated on the stove top or plugged in to an electrical outlet. You will also heat it on either side thereby distributing the heat equally. The advantage with the waffle irons is that they cook the batter more quickly and produce a crispier exterior and tender interior. For the pancakes, you will need a griddle or a hot skillet. Usually, the pancakes will not be as crisp as the waffles.

Pancakes take butter and maple syrup traditionally for toppings. The topping will soak into the pancakes and pool in the indentations of the waffles. Alternatively, you can use some fruit syrup like the blueberry. When the waffles are ready, they can also be used in making desserts. To do this, layer them instead of shortcake with whipped cream and strawberries. 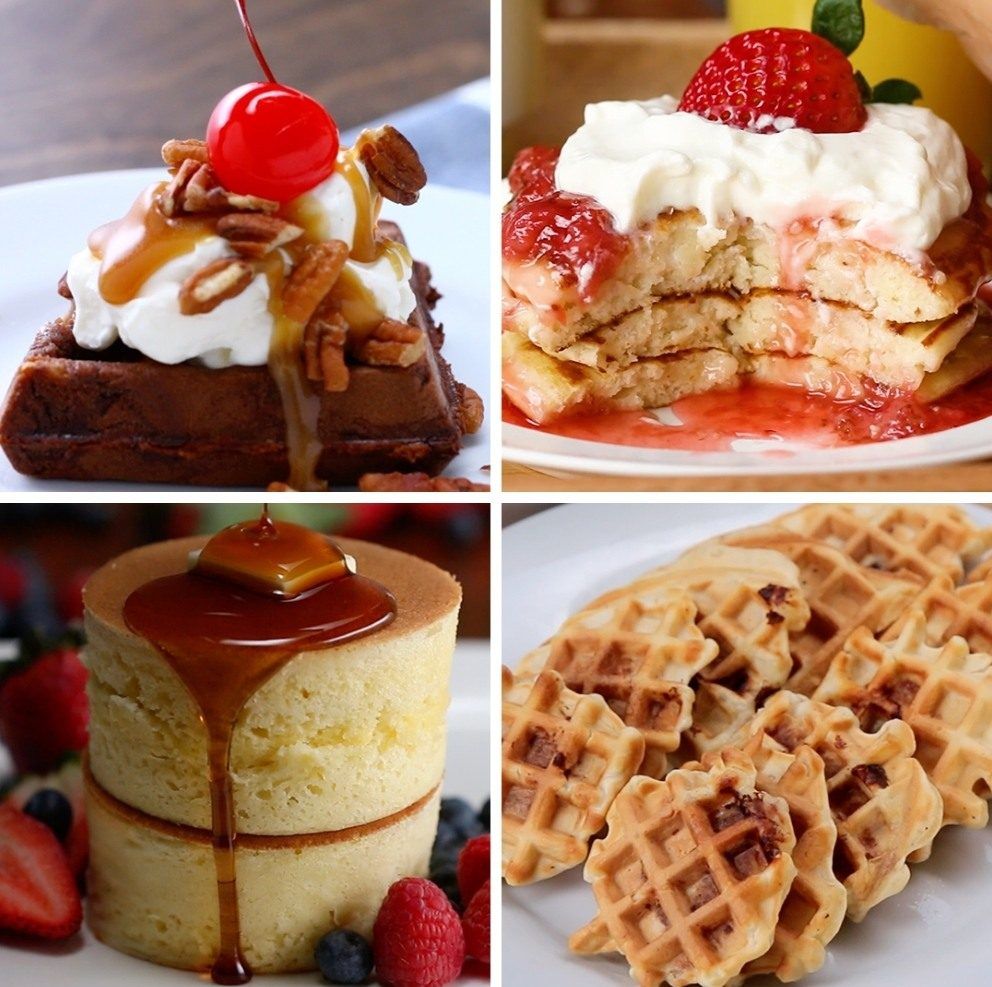 As noted, the shape of pancakes is round. You can make them without any sort of molding, but by just pouring or spooning the batter onto the griddle. The size here will depend on the amount of batter that you use as well as its thickness. Some pancakes, like the silver dollars, are just a few inches across. However, some people will opt for a plate-sized flapjack.

On the side of waffles, the shape is not a bother to you as the cook. They will take the shape of the waffle maker, whether square or round. In short, you just pour your mixture into the maker, and it will take the shape of the appliance. In most cases, the varieties are square and circular shapes. At the same time, some iron waffles will give you a thick product, referred to as Belgian waffles, while others will produce thinner and crispier waffles.

Generally, if you try making the two, you should be able to realize some of these differences. Usually, waffles will be fluffier and a bit lighter compared the pancakes. The waffles will also have receptacles that will be holding the toppings in place. For the pancakes, they are not as fattening as the waffles; most of their calories usually come from the toppings.

All in all, what makes you happy is what you make, right? Every family has their preferences. However, if you have mixed preferences in your home, it is upon you to devise the best way of handling the situation. You can decide to do both at the same time, or you can convince your family to go for each on different days.