Easy dessert—If you have ever been to Turkey,Baklava must be the most unforgetable dessert in your mind.  So I made Baklava which is improved in terms of health and simplified in terms of recipe.

Baklava is an oriental version of feuille, brushed with beef tallow, and filled with all kinds of nuts, after baking in the oven, and doused with honey or syrup. The first time I ate Baklava, I was deeply amazed by its crisp crust and abundant nuts. Actually Baklava is the dessert all the Balkan Peninsula, Lebanon, Middle East and North Africa regions eat. People are complexed about its origin, some say it comes from Central Asia, some say it comes form ancient Greek, and others say it originates from today’s Syria. But what can be sure is the Baklava served today in Balkan and Middle East regions comes from Topkapi Palace of the period of the Ottoman Empire.

I prefer to eat light desert which means less sugar and less beef tallow. This time I made Phyllo myself. Phyllo in Greece means thin paper, which implies the thinness of the crust. You can find the Phyllo in many foods of Balkan Peninsula, the Greek always fill the crust with cheese, vegetables or pork, baking it and turns it into a salty dessert, which called Borek. Making Phyllo is not complicated, just roll the crust as thin as possible. 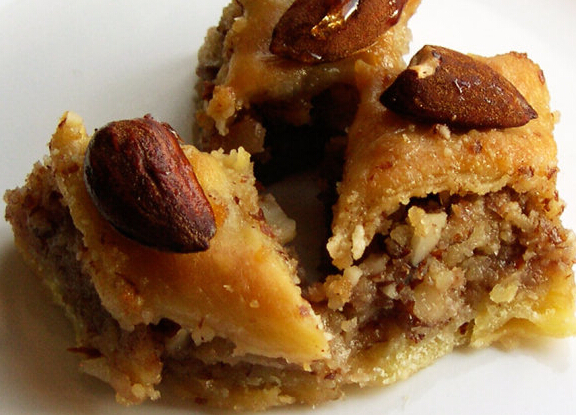 1.Take out a big bowl, add flour, dig a hole in the middle of the flour, add salt, egg, yogurt, mix it roughly with a fork, and add water slowly. Put the dough onto the table that has sprinkled flour, knead dough for 10 minutes, until it’s moisture and not sticky. Then package it into a plastic wrap, 1 hour’s standing
2.Add nuts into food processor, mash. And then add caster sugar
3.Pour the ingredients of syrup into a pan, slow fire, warm it up until the honey and water melt each other. Let cool.
4.After an hour, take the dough from the plastic wrap, divide the dough into 10 portions in average. Preheat the oven to 356F, take out a 18cm X 12cm square ovenware, brush the beef tallow on it. Roll a dough into a thin “paper”, notice not to get it torn, and put it onto the ovenware, brush the melted beef tallow. Repeat the procedure until the fifth crust is dealt. Put a half of the nuts prepared onto the fifth crust, and continue to cover another two crusts, and remember to brush beef tallow every time, and cover the rest three crusts on. Cut the feuille into diamond using a sharp knife, when cutting, make sure to use the point of a knife, do not push or the filling will come out. Put the ovenware into the oven, bake for 40 minutes under 356F, until the surface of the feuille is golden and brown.
5. The feuille that is just coming out from the oven shall instantly be doused with syrup. After cooling, cover the plastic wrap, after 12 hours’ standing, until the syrup is totally absorbed

The point to decide whether a teuille is tasty is syrup. You can make the syrup by boiling the caster sugar and water. Whereas honey makes it more exquisite in taste, and honey has less sugar, which is more healthy. In order to well absorb the syrup, you can either cool down the teuille and then douse the hot syrup, or douse the cool syrup as soon as the teuille comes out from the oven. Due to the teuille is wrapped with syrup, so it can be kept with a long time. Generally it will be stored for 2 weeks or so if you put it into a sealed box. Or you can put it into the freezer, unfreeze it under room temperature before eating, and put it into the preheated oven under 392F, bake for 5 minutes, and you will have a crisp and delicious teuille.