Cooking may be an art, but there’s a bit of science mixed in as well. Temperature is part of that science as is time. Just think about it. We bake most things like cakes and roasts at 350° for a certain number of minutes.

However, for breads we turn up the heat to about 450° for a longer period of time. Waffles are no exception. They too have an optimal cooking time and temperature.

If cooked at too low a temperature, your waffles will end up gushy, mushy, and otherwise unappetizing because the ingredients have not reached the proper temperature to meld them together and actually cook them into a single unit. Neither have they had enough heat to crisp them up.

If cooked at too high a temperature, they will end up dark, crusty or worse, burned to a crisp. Imagine placing charred blocks of batter on your plate and then trying to eat them. No amount of topping can make up for that. 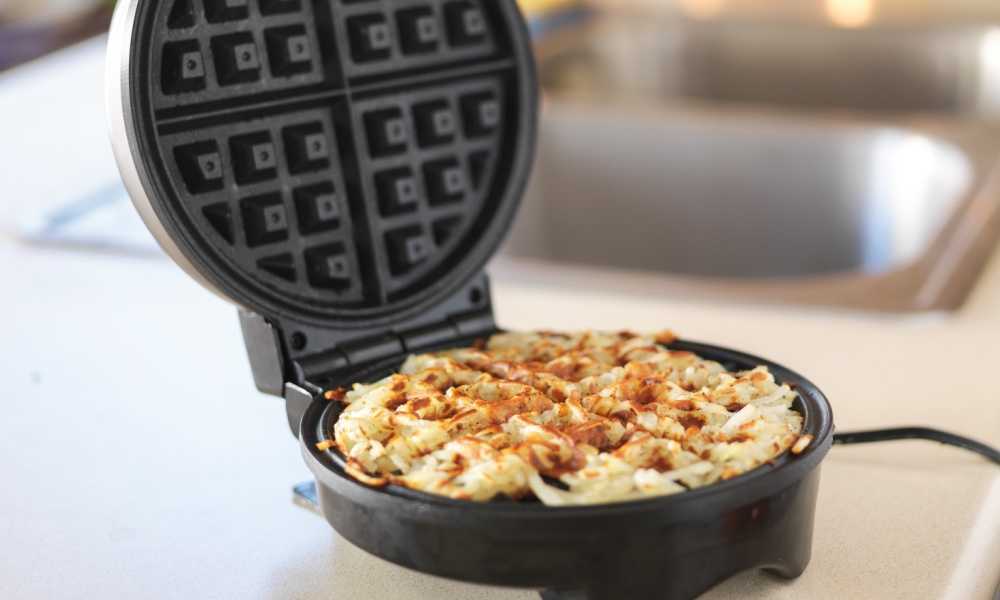 However, if cooked at the proper temperature, waffles are a thing of beauty to behold and to ingest. They will be of a perfect consistency, attractive to look at, and most pleasant to the palate.  So now you ask the next logical question. What is the perfect temperature?

These days, electric waffle makers have temperature controls which enable you to set the cooking temperature. Some have low, medium, and high settings, while others give you actual temperatures for more accurate settings. Some have dials so you can sneak up on the perfect temperature that will produce the perfect waffle. That varies with manufacturer and price.

Before you begin cooking your waffles, determine what you want them to look like and act accordingly. The great thing about waffles is that you don’t have to cook them all the same. You can customize them according to what each person likes that you’re cooking for.

If you’d like a waffle that’s darker than most, you should set your thermostat to high. That will place your temperature between 370° and 440°F. Play with that temperature range and the cooking time to get to just the right spot for just the right look and feel for your waffle. These will be toasted and crispy waffles, perfect if that’s the way you like them.

For a slightly lighter, untoasted waffle, set the thermostat for between 330° and 370°F. You should end up with a well-cooked waffle with some browning. Once again, don’t be afraid to play with the temperature and time, so you can get to just the right degree of doneness. The waffles will be well-done, slightly browned, but less crispy than those cooked at the higher temperatures. They will also absorb more of the topping.

For a waffle with very light color but still slightly brown and totally cooked, try the low setting of between 240° and 280°F. Remember, temperature and time work together. These lighter-colored waffles will be lighter and fluffier than those that have been cooked at higher temperatures for longer periods of time. They will also absorb more of any topping you may use to enhance them.

If you don’t have an electric waffle iron with a thermostat, you may have a stove top model. Several different types of products exist for both gas and electric stoves. There are even products for ceramic cooktops.

In any case, you will need to set your cooking temperature as with anything else you cook, with the dial on your stove. Using low, medium, and high on your stove’s dial is not as nearly as accurate as an electric appliance with temperature control, but you can approximate it.

The settings on your stove’s dial will closely mimic the settings on an electric waffle maker so that will give you a place to start. Make use of the finer gradations in temperature between low, medium, and high. You may have little dots between them, or numbers. This will vary from stove to stove.

Once again, pay attention to the temperature and the time it takes to cook. You may even want to make notes about which temperature works best and cooking time to produce the desired waffle.

Whether you use an electric waffle iron or a stove top iron, make sure to read the manufacturer’s instruction manual. They very often include recipes complete with how to set the cooking temperature and cooking time. Take that as your guide for your specific waffle iron and go from there. Once again, cooking should be fun, so play with both time and temperature.

Yes, cooking is an art, so look at this as your opportunity to create a masterpiece that your family will love and that they will beg you to make.