This pie is filled with American style banana cream, although it could not be exquisite as the European recipes, but it stands out for its public flavor, which is hard to resist by all of us. Plus the pie is healthy for its filling. As is known to all that banana is helpful for constipation. 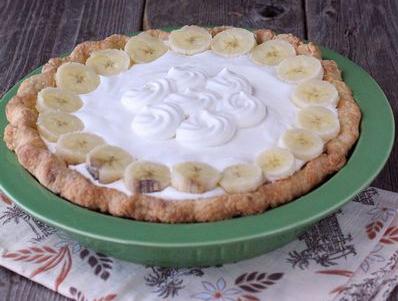 1.Make the pie crust and put it into the 9 inch pie plate, trim the edge and leave out extra 2.5cm edge, and roll it down to become the thick edge, and pinch out pattern using your fingers. Make sure the thickness of the edge shall be even and the pattern must “sit” on the edge of the pie plate, so that it could preserve the shape in the baking. And the pie crust shall be refrigerated for at least one hour for relaxing, in avoid of shrinking in the baking
2.Using a fork, poke several holes in the bottom of the pie, brush oil on the bottom of the silver paper, and lay on the pie crush, then put some heavy stuffs like rice and beans. Preheat oven to 399.2F and bake for 25 minutes. After 25 minutes’ baking, take out the heavy stuffs, and put the pie back into the oven, bake for another 10 minutes until golden and brown
3.Bring the milk to a boil
4.Mingle egg yolks, brown sugar, corn starch, cinnamon powder, nutmeg powder and salt. Pour the milk of step 3 into the mixture while stirring
5.Bring to the mixture of step 4 to a boil. Keep boiling for 1 to 2 minutes until dense, stirring in the boiling, remove the fire
6.Add vanilla extract and mix well
7.Add butter per several times and mix well, and this is called pastry cream, cover the surface with plastic wrap<it can be refrigerated for 3 days long>