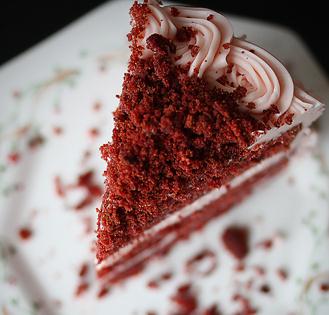 For the red velvet cake：

Notice:butter milk is a yeasty milk, also the rest milk when extracting and purifying butter. Butter milk contains little fat like yogurt, uses for baking but not eat directly. If you can’t get the butter milk, you can replace it by yogurt or sour cream.

1.Soften butter under room temperature, take out eggs from the fridge and return warm
2.Add sugar in butter and whisk until well incorporated, add eggs per several times, keep stirring, until butter ang eggs are emulsified
3.Add red food color, vanilla extract, white vinegar, mix well
4.Add butter milk per several times, mix well, at this time the butter would be watery and flowing
5.Sift plain flour, cocoa powder, salt, soda, add butter in the powder mixture, scrape well with a knife
6.Pour the mixture into a 6 inch round mould, heat oven to 356F, bake for 30-35 minutes. If there is no particle comes along with the toothpick which has been pulled out from the cake, red velvet cake is ready
7.Let cool and gently demould

For the filling and frosting：<for a 6 inch cake>