Pumpkin makes me think of Halloween, but turning to eat, pumpkin can definitely kill your hunger, and it has certain healthcare value. It contains pectin which would protect the mucous membrane of our stomach from roughage stimulation, while promote bile secretion and help digestion. So this morning, I went to the market and brought two pumpkins!

Pumpkin is no doubt a beloved in dessert. The flavor of sweet and soft make it happen to be the companion of pastries on the table, just like pumpkin cake, bread or pie.

Today I would make pumpkin bavarian cake which is simple to practice. Due to its abundant moisture, the finished cake is especially as soft as cloud. 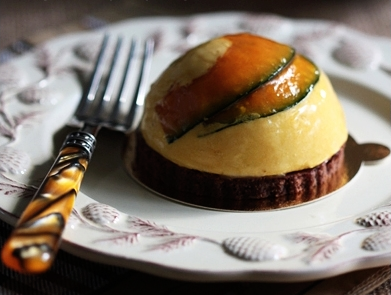 Pumpkin bavarian:
Ingredients:35gr milk, 100gr pumpkin puree, 1 egg yolk, 30gr sugar, 1 tablespoon water, 5gr gelatin, 1 teaspoon rum, 75ml light cream
1. Peel off the pumpkin and take 100gr steamed pumpkin with milk to boil on slow fire, stirring while boil, remove the fire after mix well
2. Stir the egg yolk, sugar and water together, mixing while warm up, turn off the heat when up to 176F, add soaked gelatin and stir up to melt with pumpkin puree, sifted
3. Whip light cream until 80% down, mix it with pumpkin puree after cooling, add 1 teaspoon rum , pour the mixture into the mould, when covering two thirds, press in the pumpkin filling, and then pour the pumpkin mousse to fill in the mould, refrigerate

That’s all the procedures, and I will enjoy the fresh out pumpkin bavarian cake with my friends! Can’t wait their amazing expression after eating my bavarian cake, wow! Let’s celebrate with the heavenly cake!