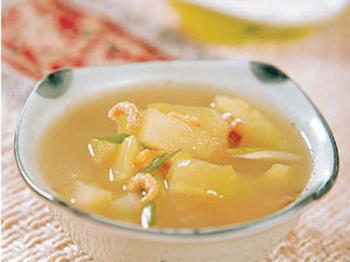 How to make the watermelon skin soup?

Keep the watermelon skin after eating the watermelon. And peel off the red flesh parts, leave the watermelon peels. Then cut off the green skin, and place them for using. Shred the remaining fleshes, and that’s two parts. Boil the green skin parts with water<add nothing if you are a vegetarian, whereas you can put several dried shrimps in>, when boiling, do not cover the lid<the soup would not be green if you cover the lid>, about 15-20 minutes later, the whole water turns into green color, which is very beautiful. Pick up the green skin parts from the soup with chopsticks, and put in shredded watermelon and boil with no lid covering on. Drop pinch of olive oil into the pot, the soup is so beautiful with green color, which likes the emerald. When you feel the shredded watermelon is rotten by clipping with chopsticks, at this time you can season with some sugar and salt. After the flavor is just right, then dress with starchy sauce, make sure to use potato starch, do not use corn starch, by which way the color would be better looking. The reason lies in that potato starch is crystal, but corn starch is white, which would add green an ugly color.

When spoon the soup, add some MSG, and drop pinch of sesame oil, if you like cilantro, cut some and put in.