In france, the first Sunday of French new year is the Three Kings Day, people have to eat Galette des rois. In cold winter days, by eating this crispy Galette die rois with dense flavor of butter and almond, it would bring a warm and sweet feeling as usual as before in our memories.

Galette des rois is generally made of Millie- feuille, butter, egg and sugar. People would hide in a broad bean in the Galette des rois when making, but now it has changed with all various of lovely feve, and nowadays, Galette des rois has many many tastes like chocolate, apple and various of jams. However, the French people are favorite of traditional almond cream Galette des rois, which was invented by a noble man of Baron in Florence called Frangipani at fourteenth century.

The season of Galette des rois begins at twelve days after Chirstmas Day and ends at Tuesday before Feast. The Epiphany on Janurary 6 is in memory of the first present of newborn Jezus in front of Three Kings. In the past, the ancient Romans has a tradition to celebrate the Saturnalia, they would decide who is the King and Queen of the day by the black or white broad beans that are hidden in the Galette des rois.

The recipes of making Galette des rois are in a great deal and very simple and similar. And since I intend to make Galette des rois, I‘d rather choose a traditional recipe to follow. And I came into thought of my master chef friend Laurent, he sent to me his cherished professional teaching material for almost twenty years, which includes the main dishes of France and desserts. So I learned how to make Galette des rois from this old book. 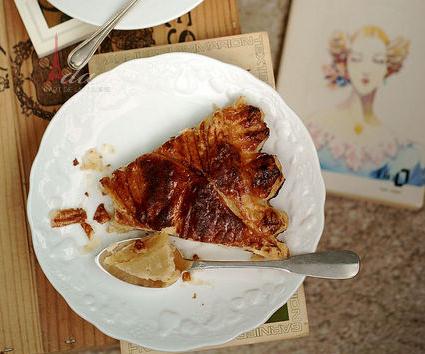 1. Beat butter on medium speed in a cooking pot
2. Stir in caster sugar
3. Add eggs one by one, whisk
4. Fold in almond powder
5. Pour in several droplets of vanilla extract and a few droplets of rum, mix well

For the combination and baking:
1. Place a dough on a baking paper, use a fork to dig some holes on the dough
2. Pour the almond cream paste onto the dough, spread out round shape with diameter of 16cm to 18cm, and hide in feve at this moment
3. Cover other dough, flat the dough with the help of your hands to let go of extra air. And use your fingers to make doughs up and down stick to each other
4. Refrigerate for at least 30 minutes
5. Cut petal shapes in all areas of the dough with a knife
6. Brush with whole egg wash
7. Draw patterns with the point of a knife according to your favorite
8. Open a cut on top of the dough and poke a hole with a toothstick
9. Bake at 200F for 3 nminutes, and remove from the oven, brush with whole egg wash for the second time
10. Bake another 35 to 40 minutes, cover a silver paper if too dark with the color
11. Remove from the oven, brush evenly with surup, let cool for 20 to 30 minutes