Healthy dessert —This “Buche” breaks the tradition of  greasy and fat, cuz’ I used mousse which is light dessert instead of the  cream cheese frosting. The recipe is written all by my heart and soul in order to offer you a healthy dessert which names Buche.

French speaking countries like France, Belgium, Quebec of Canada would end the most important family dinner of the year with Buche as the X-mas feast at the Christmas Eve. The tradition of making cakes into a shape of tree trunk was originated from the European Old Times, which, they would burn a huge tree truck for getting warm at the Christmas Eve. In the old times, people thought the tree trunk would be good as big as possible, and the ideal days of tree trunk burning would be lasted for 12 days, which symbolized the good luck as exuberant as fire.

Today’s French have seldom burned tree trunks, but the habit of eating Buche has been inherited from generation to generation. The most traditional Buche has an ordinary cake roll inside, and with thick cream cheese frosting outside. But it has been abandoned by cities like Paris ten years ago for the cream cheese frosting is too greasy, nowadays, the on sale Buche in French dessert shops are generally mousse cakes, thin cake base with soft and different mousse, tasty and healthy.

I made Buche au chocolat every X-mas, the cake base with soft chocolate and egg whites is called Dacquoise, mousse is chocolate flavor, wrap the cake with crisp filbert jam, and douse it with black chocolate jam, there is no one said no about my Buche.

To make this cake you shall arrange well your time, although it is not difficult technically. Generally I would prepare the cake base and filbert jam before the day, and on the day it needs only make the chocolate mousse and combine them. Make sure to pre-prepare of the X-mas feast for on that day it would be a chaos. The Buche I made serves for 6-8 people, and it needs a professional long mould for the Buche. If you can’t buy the mould, just cut a mineral water bottle into a 35cm long “mould”. 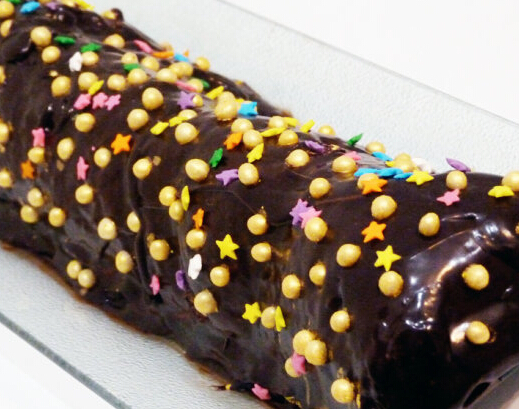 1.Preheat the oven to 356F, add egg whites into a clean container, whip it to a foam, add caster sugar, keep whipping until stiff. Add almond powder, gently stir.
2.Put black chocolate into a bowl, melt the chocolate using water-jacket heating mode. Pour the melted chocolate into the egg white-almond paste, gently stir. Then smear the cake paste evenly onto the ovenware that is covered with a butter paper, put it into the oven for 15 minutes, until the cake is golden and brown, take it out, cooling, and package it with plastic wrap, freeze.

For the mousse: 250gr liquid cream, 40gr caster sugar, 25gr water, 50gr egg yolks, 200gr black chocolate<Contains cocoa powder more than 70% >
1.Take out a pan, add water and caster sugar, warm up to 185F, remove the fire
2.Beat egg yolks for 5 minutes until it’s dense, add the sugar juice and keep stirring, until the egg yolk liquid is expanded with a pale color
3.Melt the black chocolate by water-jacket heating. Put the liquid cream into another container and whip it to doubled volume and turns into hard
4.Add the melted chocolate into the egg yolk liquid, and add the cream, gently stir well, put the chocolate mousse into the fridge

For the combination:
1.Cut the well baked cake into a size that is appropriate for the mould
2.Cover the mould with a plastic wrap, lay a half of the chocolate mousse into the mould using a spoon
3.Take out a pastry bag, put filbert jam in, and squeeze out them evenly onto the mousse, with a long and round shape. And cover the rest mousse with a same height of the mould, at last put on the well cut cake slices, package it with a plastic wrap, freeze for 4 hours

For the decoration: 200gr chocolate jams, a hint of crispearls and powdered gold, all sorts of candies
1.Take out the cake after 4 hours, rotate the mould into a long shape container, take away the plastic wrap softly
2.Melt the chocolate jams with oven, douse it evenly on the surface of the mousse, make sure the temperature of the chocolate shall not be too high, just higher than your fingers would be okay.
3.Roll the crispearls in the powdered gold, and then sprinkle them onto the surface of the cake, decorate with all kinds of candies or biscuits, put it into the freezer, cut into bulks before eating