Thanksgiving Day is ruled by two powerful words beginning with “f”: “Food” and “Football”. It became a tradition to hold football games on THANKSGIVING since the first competition was launched in America at the year of 1876. And watching football games became a tradition too which had a long history just as the same with football games themselves. After ten years later, there were more than 5000 club, college and high school teams holding games on thanksgiving. Among them the competition between Princeton and Yale drew over 40,000 fans on the spot.

Thanksgiving was initially meant to be a fast, not a feast. The settlers at Plymouth Rock firstly thought to give thanks in the form of prayer and restraining from food. But the Indians of Wampanoag took part in them for their 3-day celebration, and brought them with their harvest traditions – dancing, games and feasting, Nickommoh, meaning to “give away” or “exchange”.

Now that Thanksgiving Day is soon to come, I’d like to introduce you with a last pie on your thanksgiving table, which is the healthy Coconut Cream Pie. Coconut is a commonly seen fruit in tropical region, high in protein, vitamin B & C and microelements, which can effectively supplement our bodies with nutrients, improve the capability to defend disease. Drink coconut juice or eat coconut flesh could moisten our skin, thus it can beautify our faces.

Method:
1. Blend medium protein flour, caster sugar and sea salt together, add coconut oil and scrape well
2. Add coconut milk per 3 times, each time mix well
3. Cover the dough with a plastic wrap and store in fridge for at least 1 hour
4. Preheat oven to 424F. Roll the dough into a 11 inch diameter round slice, and put it into a 9 inch pie pan, trim the extra edge, store in fridge for 15 minutes
5. Cover it with a silver paper on the pie crust and bake fro 20 minutes, better spin the pie pan once in the course
6. Remove it from the oven, after several minutes’ standing, tear off the silver paper and let totally cool
7. Reduce oven to 323F and bake for another 10-20 minutes, remove it from the oven and let cool
8. Mix tofu, chocolate, milk, rum, vanilla extract and salt together, pout the mixture into the crust, store in fridge for at least an hour
9. Whip coconut juice and sugar until fluffy and smooth, spoon the mixture on the top of the pie, decorate with some chocolate particles or shredded coconut 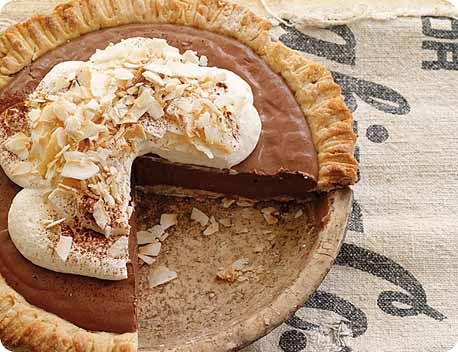 Method:
1. Firstly, poke many holes on the crust
2. Put the crust into the oven, 350F, bake for 10 minutes or golden and brown
3. Let cool
4. Prepare a large bowl, put pudding powder in and pour in 2 cups milk
5. Stir with patience
6. Pour the pudding on the crust, store in the refrigerator for 20 minutes
7. Spread cream evenly on the pie
8. Sprinkle coconut flake 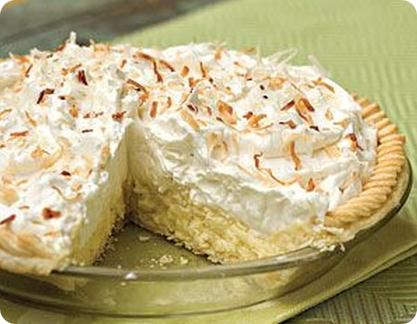